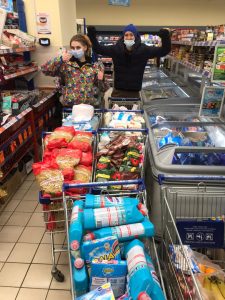 At the beginning of December SocioMovens Ukraine had their First Generation meeting in the Eastern part of Ukraine. Five former participants of project weeks in Lviv and Kyiv spent five days together with the coordinators in different cities in Eastern Ukraine (Pokrovsk, Slovians’k) to introduce themselves as socioMovens Ukraine, to meet, exchange and network with local volunteers, to bring products of daily needs to socially disadvantaged families and to listen to their worries and needs.

The group spent the first two days in Pokrovsk, where they met the local protestant community that takes care of families in need. Together they visited 25 families in villages near to Pokrovsk. The youths had the opportunity to see the real conditions in which people live and understand what problems locals face every day. The products of daily needs arrive here exactly in the right place – these were thoughts of the youths of socioMovens. Afterwards, the group presented their work as socioMovens Ukraine. Duing a First Generation evening, they also discussed future ideas and projects.

After Pokrovsk, the group went to the next city: Slovians’k. They visited a military hospital and brought gifts they prepared with the whole group before to the soldiers.

“This was an important and emotional experience for me to talk to the wounded soldiers. I think I only now understood the real price of freedom.” (Participant of the First Generation Meeting)

After the visit in the hospital, there was a dinner with volunteers from the local organization. Until late in the night, they discussed problems the young people in this region have and how more young people can be motivated for engagement and social work. They fixed already first ideas to get involved in this region in the future. The youths people had the opportunity to walk around Slovians‘k and see how the city has changed since the beginning of the war. More importantly, they had the opportunity to speak with local young people and hear their real (sometimes heartbreaking) stories.

“It’s important to do more often First Generation Meetings online or offline, just to talk with each other more often. Like this, we want to encourage more people from last projects to be more engaged into socioMovens in future.” (Olha Sikyrynska, coordinator in Lviv, Ukraine)

Tired, full of experiences and new ideas, the young people have returned home. The fact that socioMovens is needed became ones more clear to them during this project.

You can find more photos of the event in the gallery. 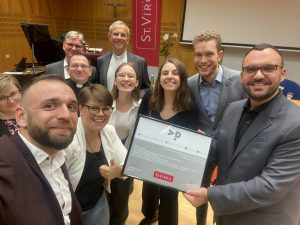 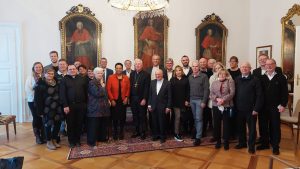